Zozobra! The Gloom Must Be Burned: A Story And History Of New Mexico's Old Man Gloom 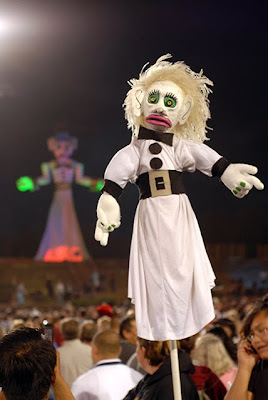 Darkness has fallen over the city of Santa Fe, and the crowd is getting restless.
“Burn him! Burn him!” the revelers shout into the warm September air.
Before the throng –about 23,000 women, men and children – a 49-foot-tall marionette hangs from a pole on a rise above Fort Marcy Park. Soon, Zozobra, named for a Spanish word that roughly translates as “anxiety” or “anguish,” will go up in flames, along with the city’s collective gloom. 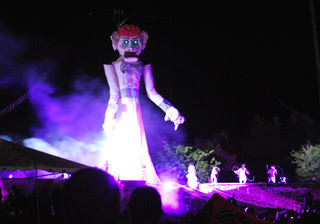 Looking like a hideous but nattily dressed tall, thin clown, with Mick Jagger lips, a shock of blue hair, big ears and a white skirted tuxedo with a gold bow tie, Zozobra moans in protest. Jaws flapping, head twisting slowly from side to side, demon-red eyes darting this way and that, he waves his thin arms in a futile deathbed dance. 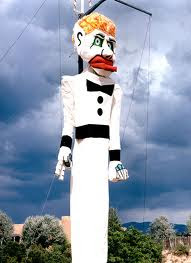 Tucked within his androgynous frame are bits of “gloom” – scrawled regrets, divorce papers, eviction notices, and a never-used wedding dress.
While most of the crowd eagerly awaits Zozobra’s imminent immolation, heckling and whooping, some of the kids in the audience are clearly spooked. A little boy in his father’s arms turns away and burrows his face into his father’s neck. “I’m scared,” he says. “It’s OK,” his father reassures him. “He’s not real.” 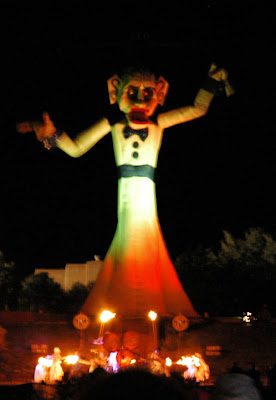 At Zozobra’s feet, a procession of white “glooms,” child dancers resembling diminutive ghosts, are chased away by the Fire Dancer, who taunts Zozobra in a blur of red. Finally, as Zozobra’s moans reach a fever pitch, the keeper of the flame puts a torch to Zozobra’s long, flowing skirt. (The moaning emanates from a behind-the-scenes recording, broadcast over loudspeakers, and is synchronized with the opening and closing of the puppet’s huge mouth.) The crowd cheers as the flames quickly consume him, along with all of their castoff gloom from the past year. Amid a flash of fireworks, what’s left of him falls to the ground in an anticlimactic slump. A persistent white arm, bent at the elbow, fingers pointing toward the heavens, is the last bit of “Old Man Gloom” to succumb to the flames. The whole thing is over in a matter of minutes.
Every September for 86 years, Santa Fe residents have gathered to witness the burning of Zozobra. They come because it’s a spectacle like no other. They come to be entertained. They come to honor a uniquely Santa Fean ritual in a town that calls itself the “City Different.” But above all, they come for the sublime satisfaction of watching their sorrows go up in smoke.
“I think they need a catharsis, a release,” says Ray Valdez of the Santa Fe chapter of the Kiwanis Club, the event’s producer, who has helped orchestrate the building and burning of Zozobra for 21 years. “They need a bogeyman, a monster they can focus their gloom on. We put all our evil, bad things in him, and it will all go away, even for just a moment.” 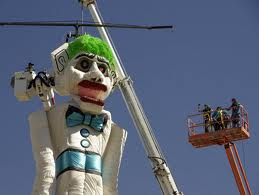 Valdez became hooked on the Zozobra mystique after his first encounter with Old Man Gloom at age 6. For the next few years, he was obsessed with burning dolls, he remembers.
Frightening as it may be today, the burning of Zozobra began as a sort of artistic prank. In 1924, local artist Will Shuster burned the first Zozobra in a friend’s backyard for the entertainment of a few fellow artists. It was his way of poking fun at La Fiesta de Santa Fe, a somber, 300-year-old celebration commemorating the reconquering of the area by the Spanish on September 14, 1692, after their ousting by local Pueblo Indians 12 years earlier. 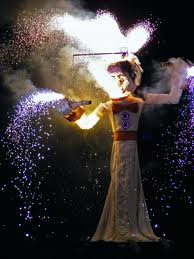 Fiesta “had become a bit stilted and perhaps too commercial,” Shuster wrote in the Santa Fe Scene in 1958. “The artists and writers of Santa Fe hatched out an hilarious post-Fiesta fiesta, called El Pasatiempo. And Zozobra was born.” (Pasatiempo is the Spanish word for pastime or amusement.)
While the modern-day Zozobra resembles a scary clown in a tuxedo, his earliest ancestors looked more like caricatures of Spanish explorers. “In the beginning they were making little conquistadors, with goatees,” Valdez says. “They were making fun of Fiesta.” 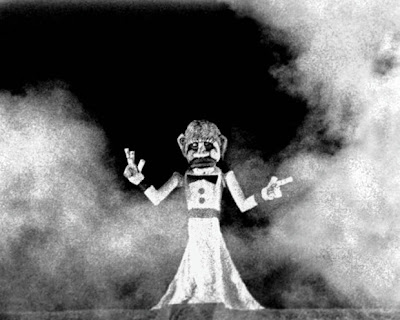 But the Fiesta councilors proved to have a sense of humor, and in 1926 they asked Shuster to bring Zozobra to the public. Over the years, the annual event attracted increasingly bigger crowds, and eventually moved to the park. Today, attendance fees help fund college scholarships and youth programs. 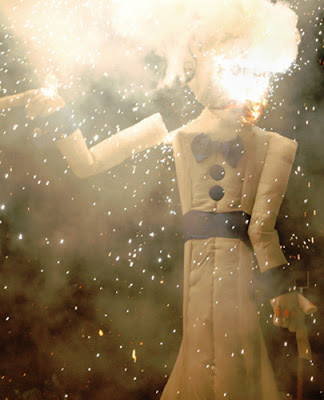 The event, which is now held just before the start of Fiesta, has also come to mark the beginning of the very celebration Shuster had satirized by creating Zozobra. As the crowd heads out into the streets after the burning of Old Man Gloom, shouts of “Viva la fiesta!” echo through the city’s historic streets.
Besides losing the goatee and taking on a more monstrous demeanor, Zozobra has grown taller (in the 1930s, after an embarrassing mishap with an ill-fitted loincloth, he acquired his trademark long white skirt.) His frame and facial features essentially have remained the same since 1938, although his hair and tuxedo accouterments change color from year to year, and some strategically placed pyrotechnics now add extra spark to his spectacular demise. 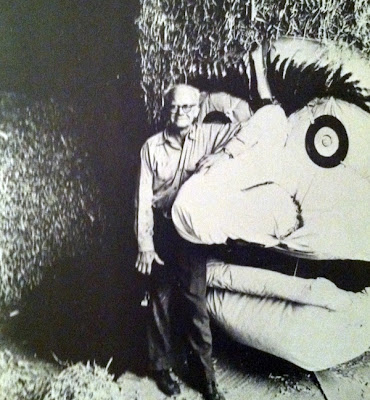 Despite his Twiggy-like figure, Zozobra weighs 1,800 pounds. His frame is made of furniture-grade wood (“it burns better,” Valdez says), and the rest consists of chicken wire, hundreds of yards of unbleached muslin, enough nails and screws to build a small house, pulleys, two pizza pans (for the eyes), duct tape, shredded paper and hundreds of gloom-laden items submitted by the public. It takes a group of volunteers, overseen by Valdez, two months to put Old Man Gloom together. 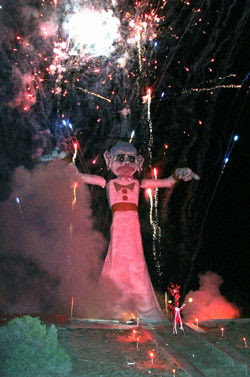 Santa Fe is not the only community to send its collective woe into the heavens. Shuster found inspiration in similar rituals from other cultures, including the Holy Week celebrations of the Yaqui Indians of Mexico, who burn an effigy of Judas after parading him around the village on a donkey, and a tradition in Caribbean fishing villages that involves lighting paper boats on fire and pushing them out to sea in hopes of ensuring safe passage for fishermen. Zozobra is also reminiscent of Wickerman, a scarecrow-like effigy burned by the Gauls at the end of the harvest season. 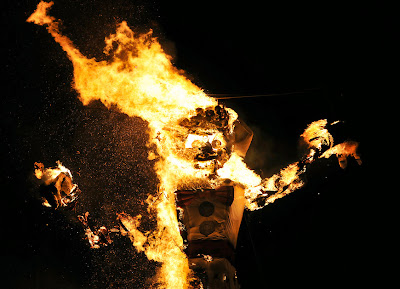 Zozobra himself has inspired other, similar effigy burnings, including Burning Man, held each summer in Nevada, and Albuquerque’s El Kookookee – the Bogeyman. But Zozobra, in all his hideous, gangly glory, remains one of a kind.
For some, the mass purging of gloom even approaches a spiritual experience.
“It felt like a renewal ritual,” says David Gold, who has attended almost every burning of Zozobra for 35 years, reflecting on the September 9 conflagration. “And there was a power to it – the power of that group consciousness.”
But there’s a more sinister side to this peculiar ritual. Zozobra is, after all, a scapegoat.
“We got our bogeyman, we string him up on a pole and we burn him,” Valdez says. “What better scapegoat is there than that?” 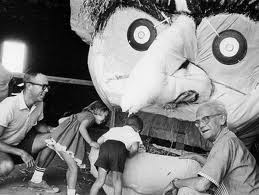 Indeed, Old Man Gloom has at times become a symbol of a larger societal malaise: Longtime Santa Fe residents remember when Zozobra took on Japanese features during World War II and assumed a Nixon-like scowl in the 1970s.
But perhaps part of the reason we Santa Feans find such sublime satisfaction in Zozobra’s firey demise, young and old alike, anglo and hispanic, pueblo Indian and Mexican, is because we’ve all been scapegoats ourselves at one time or another. And, chances are, we’ve all projected our own gloom onto someone else at one time or another, too.
While the Zozobra tradition is only 86 years old, it continues a ritualistic purging of woe that dates back to ancient times. The origin of the word “scapegoat” is found in the Old Testament of the Bible. In Leviticus 16, God instructs Aaron, older brother of Moses, to release a goat into the desert to carry away the sins of the people of Israel:

“And Aaron shall lay both his hands upon the head of the live goat, and confess over him all the iniquities of the children of Israel . . . and he shall let go the goat in the wilderness.” 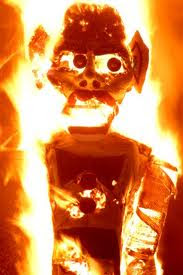 The Ancient Greeks practiced a scapegoating rite, but instead of banishing an animal, they cast out a human being -- either a beggar, criminal or cripple. In other cultures scapegoats were put to death.
Our own history is sullied with the dark injustices of scapegoating, from the burning at the stake of women accused of witchcraft in Salem, Massachusetts, to the lynching of blacks in the South.
The Zozobra ritual, with its harmless expunging of communal gloom through the burning of a giant wooden doll, is a reflection of more civil times. 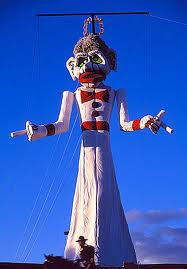 “He may be a scapegoat, but it’s better than a human sacrifice,” says Gold with a laugh.
Yet watching the last of Zozobra No. 86 smolder, as bits of ash fall upon my hair and clothes, I can’t help but feel a pang of sorrow for him. Seeing this involuntary bearer of the entire city’s dolor go up in flames has me feeling, well, a bit gloomy. Zozobra’s moaning and
anguished gesticulations are so convincing that over the course of the evening, he begins to seem almost human. 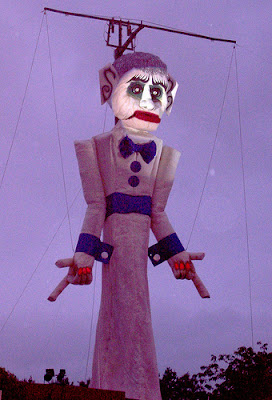 But the man who knows Zozobra best is unsentimental about seeing his freakish creation reduced to a pile of embers. 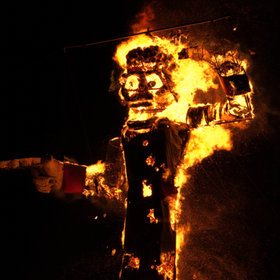 “It’s fun to build him and then watch him destroyed,” he says. “He can scream and cry as much as he wants, but it’s not going to help. Gloom must be burned.”
For more information on traveling to Santa Fe, " The Vienna of The Southwest" visit the Chamber of Commerce of New Mexico's website, and be sure to share your stories with us! 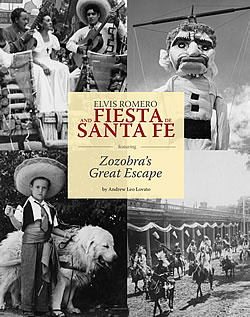 A Great book on the history of Zozobra: